The One Chunk Challenge - 2 pack

Ready for the One Chunk Challenge?

This is one small square of Carolina Reaper peanut brittle, the world's hottest pepper, and dusted with a LOVELY coating of Ghost Pepper. The One Chunk Challenge is intended for adults of 18+ years only, and is done at your own risk. Taking the challenge is probably not the best idea you've had today... But if you do it, we'd love to see your video!

Not your Grandma's Peanut Brittle.

Hope your wing party was awesome James, thanks for using our products!

B
Brian
this ones a doozie alright

I did this challenge at a flea market today where I buy maritime madness sauces. I guess the guy was just filling in for the dude who normally sells them an didnt know much about the challenge, nevertheless, the rules were there and stated you had to chew the brittle for 30 seconds, then wait there for 5 minutes without eating or drinking anything, the challenge cost $10 and if you do it you get $20 credit toward hot sauce, naturally I thought what a great deal. Now something to keep in mind, self admittingly, I should have ate something beforehand so it wasnt on an empty stomach, and drank some water first or at least had some with me. The guy said that in Canada we can only sell up to a level 10 in hot sauces so I assumed this applied for the brittle. Lol I soon was to find out it does not. This brittle is far hotter than any hot sauce iv ever had, including the hottest maritime. So after my face burnt and my lip sharted shaking, the guy let me know when 5 minutes was up and I won a free bottle of sauce. I immediately left and proceeded to the bathroom where I thought I was going to puke, except my body hates puking, it keeps mostly everything down, after a few mins of not being able to puke I left and layed on a picnic table sweating profusely, a lady walked by and asked if I need an ambulance because there was actually a puddle of sweat under me. I said no thank you (ambulance cost $150 here, that eat up all my profits) but I needed water, worried for dehydration as I was losing fluid faster than ever before. I told her what I ate and she said I was really dumb for doing it on the hottest day of the year. (Been 30+ all week) I got some water, past out for an hour, could actually barely walk my stomach burned so much lol. finally made it home after they closed, and sat in the shower for a good 20 mins to stop sweating. Drank alot of water and ate abit of food to dilute the heat. The stomach pain was absolutely miserable. Still feeling it though not nearly as bad 5 hrs later. I am fine, but dam that is hot brittle. But now I know. 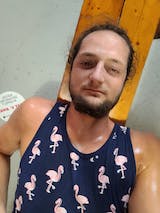 Hi Brian, sorry to hear the One Chunk Challenge was so hard on you.
It really seems to effect everyone differently, we have actually had some customers claim that it's not hot at all!
Thanks for your honest review.

C
Curtis Charest
I didn't know what to expect...

But I didn't expect that. It was so unbelievably hot. Hottest thing I've ever eaten by far. I thought I had eaten very hot things before, but now I know they weren't THAT hot. That chunk was something else.

Ha ha! Glad it was hotter than you thought as opposed to not hot enough!
#sorrynotsorry

I need to know how many Scovilles this is, it was IMMENSE. I did the Death Nut Challenge which has a 13 Million Scoville final stage... this seemed to nearly equal that in intensity. Does anyone know??

Great video Devon! We're not sure on the exact Scoville rating for the One Chunks but they're darn hot!

A
Aaron Corey
Fight for survival

I have been loving your hot sauces for years. Haven’t tasted one yet that I haven’t gone back for more. My niece got me a one bite challenge for Christmas. I finally got up the courage to try it last night. I made it just over 3 minutes before survival mode kicked in. 3 glasses of milk, 7 handfuls of snow, 2 jumbo frezzies, 6 ice cubes and 10 tums later I started to recover. I’ve been Pepper sprayed in the past for work. I would rather get sprayed again then get challenged again.... in all seriousness well done... your brittle is delicious next time I’ll take mine without the Carolina reapers!!! Keep up the good work!!!

Lol that made us all laugh! Thanks Aaron. Appreciate your support!

This is a Christmas gift so I haven’t tried it, but it looks wonderful.

We make sure we always have this in hand, so good - adds flavour without being too spicy

Got this yesterday along with other sauces I ordered. Tried this & I love it. Has a kick but not overly hot. Will order this flavour again