- High in vitamin A, C, and the complete range of B complex vitamins

- High in beta-carotene, a potent anti-oxidant

- Rich in calcium and potassium making it wonderful for the heart

- A blood detoxifier and have been found to reduce cholesterol

- Helpful in preventing ulcers by killing bacteria you may have ingested, while stimulating the cells lining the stomach to secrete protective buffering juices.
- Good for the digestive system as well as the heart & circulatory system. Chiles contain a powerful alkaloid called capsaicin, which gives chiles their heat and which isn't found in any other plant. It's so potent that humans can detect it even when it's diluted to one part per million. The capsaicinoids as they are also known, are produced in the plant by the placenta, the part just below the stem of the chile that's also where the seeds and the ribs grow. These parts, on average, are sixteen times hotter than the rest of the plant.

Because they speed up the metabolism and help with digestion, spicing up bland foods with hot sauce or chiles instead of salt or butter is a very healthy way to go . Hot peppers are low in calories, contain twice as much vitamin C as citrus fruits and more vitamin A than carrots! Eating chile pepper products regularly helps speed the burning of calories, and tastes great!
Many creams for pain relief, especially for arthritis and joint pain, commonly contain capsaicin. The depletion of substance P in the nerves helps to reduce nagging pain. Contrary to popular opinion, spicy foods actually aid in the healing of ulcers by stimulating the mucosa of the stomach.

Chile peppers have natural antibiotic properties, and the primary cause of ulcers is the bacteria, Helicobacter pylori, for which antibiotics are the best treatment. Spicy foods don't cause ulcers, but they can aggravate an existing one.

THE HOTTEST PEPPER IN THE WORLD

The hottest pepper in the world is Pepper X, weighing in at over 3,180,000 scoville units. The Red Savina habanero was long thought to be the hottest, but it turns out there has been one twice as hot around for centuries.


THE SCOVILLE UNIT
The Scoville Unit is the measurement of heat in a pepper or sauce, named after the chemist Wilbur Scoville. A quantity of pepper is dissolved until it can no longer be detected, and is recorded in units of 100. The proper name is the "Scoville Organoleptic Test." These days, a sophisticated device called a liquid chromatographer is used.


WHAT EXACTLY MAKES IT BURN?
When you eat chiles, capsaicin irritates the pain receptor cells in your mouth. The receptors then release something known as "substance P", which alerts the brain to the pain. In response, the brain produces chemicals called endorphins that kill the pain and elicit feelings of well being. Does hot, spicy food taste less hot after a couple of bites? Chile enthusiasts say that this is the endorphins at work. Some experts theorize that it's the addictive nature of endorphins, not the taste of the chiles themselves that makes the spice so popular.


HOW CAN I PUT OUT THE BURN?
Reach for ice water when you eat a hot pepper? Not a good idea, not only will it not cool your mouth down, it usually makes things worse by spreading the capsaicin around. Beer might work (experts aren't sure), but the best way to put out the fire is to drink cold milk, or any dairy product (eg. frozen yogurt or ice cream). These products contain casein, which acts like a detergent that washes away the capsaicin. Other recommendations: sugar, salt, tortillas, hunks of bread and corn or lemon and lime juice used as a rinse.
Customers rate us 5.0/5 based on 2381 reviews.
★ Judge.me Reviews

Smoked 2 12lb pork shoulders for my grandsons birthday. Added the Super Sauce to mix and everyone commented on how good it was. Now I’ll take some of the credit for my masterful cook but the Super Sauce gave it that little extra. 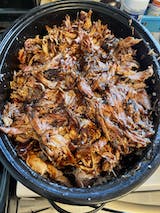 I think I am addicted!!!! I may need to look at monthly orders.

I love the great selection of flavours. My new favourite is the Mexican Mole’